Viking Runecraft is the latest slot from Play’n GO. And we’re really excited for this one! Not only is it breaking the mold in the sense of reels and paylines, but it’s also ridiculously volatile. The aim of Viking Runecraft is definitely to keep things fun, and to award players with some great prizes. But it’s doing all that in a truly innovative way.

If that wasn’t enough, Viking Runecraft is themed around Norse mythology and Nordic gods. All the Thor lovers out there will definitely jump at the chance to rub shoulders with these iconic characters and settings, not to mention winning big while doing so.

Viking Runecraft pretty much explains what it is in the title. We’ve spoken about cultural diversity in online slots before, and this cascading slot is representing the history behind Nordic European countries. Not to mention, let’s not forget that the Vikings even made it as far as Canada, which makes Christopher Colombus look like he was late to the party. Vikings worshiped the Norse gods, almighty in their power and size. It’s no wonder that Play’n GO finally modeled a slot after the godly likes of Thor, Odin, Freya and Heimdall. Who wouldn’t?

The design and graphics of Viking Runecraft perfectly reflect the setting and history we’re dealing with when we speak of Norse mythology. There are 13 symbols in total, and while they have different values, all of them are runes. Wilds are gold runes, high-paying symbols are runes with the weapons of the gods on them, and low-paying runes are old weather-beaten runes. The background of the slot seems to be of a treacherous looking mountain and a Norse god, probably Odin, is standing to the right of the slot screen.

The aesthetic of the symbols complements the rest of the slot’s background. The symbols are an important part of the overall gameplay and design given that the slot is a cascading slot. Thankfully, this game is definitely one of Play’n GO’s more sophisticated in terms of both graphics and gaming so the total effect really works well together.

Viking Runecraft: the Pros and Cons

Viking Runecraft is a cascading slot, which basically means that while there are ‘7 reels’ it’s more of a 7×7 grid where symbols drop down into the grid to make-up winning combos. What this means is that there aren’t any paylines to speak of, except for one which isn’t visible to the players. What there are instead ‘patterns’ or ‘sequences’ which, when activated, win money.

Wins are achieved when 5 or more symbols fall into a connected cluster where the symbols touch the other symbols horizontally or vertically. The game will continue to cascade until no new winning combos can be created from the symbols.

Importantly, Viking Runecraft is played in levels. Each level corresponds to a different Gift of the God (see below), and corresponding bonuses.

The gameplay for Viking Runecraft is especially complicated (there are about 7 special features), so hang tight while we try to break this down as simply as we can.

There are four different wild symbols in this game, all named after four Norse gods: Odin, Thor, Freya, Heimdall. The slot symbols appear as gold runes, as contrasted to the normal weather-beaten runes. These symbols substitute for all other symbols in order to help the player get winning combos.

The meter of destruction is a bar that appears to the left side of the slot game. All winning combos contribute to the meter of destruction, filling it up slowly. When the meter is full and there are no more winning combos left because the cascade has stopped, the charge effect is activated. The charge effect itself can trigger one of the four following special features: 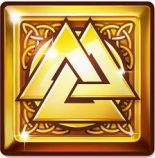 Three symbols are set ablaze. The fire can spread to a random number of nearby symbols. All burning symbols are destroyed. In each cluster of burnt symbols, a core of new symbols is created. All symbols in each core consist of the same symbol.

Gift of the Gods

In order to be graced with the presence of these almighty gods, you need to hit a specific pattern in the winning combos and level-up in the slot. When the combo is hit, you get one of four gods according to the level – the God of Thunder (Thor), the God of Wisdom (Odin), the God of Guarding (Heimdall), and the Goddess of Beauty (Freya). We’re sure you’re already familiar with these guys from the Marvel movies alone.

The point of the Gift of the Gods is to activate a bunch of random wilds across the cascading symbols. Each God triggers their own unique sequence of wilds. A specific God triggers their specific wild rune. Makes sense right? What this does is greatly elevate your chances of hitting winning combos and winning some real cash.

The Gift of the God special feature is randomly triggered during a non-winning combo round. Yep, that means you can just be casually watching some runes cascade when suddenly this wild madness is unleashed and you start winning money.

Runes of Valhalla bonus round

Aside from contributing to the meter of destruction, winning combos also contribute to the Runes of Valhalla bonus. Collect at least one Rune Stone symbol win combo and clear your active pattern to trigger this bonus round. The bonus round itself is a Wheel of Fortune style bonus round. A wheel will start spinning and your goal is to hit any field on the wheel with an active and lit rune. If you manage to hit it, you’ll win the accumulated bonus amount.

Will you bear witness to the glory of Valhalla?

Ragnarök can be triggered in two different ways: directly by double charging the meter of destruction, or by charging it once, then activating one of the four charge effects, then charging the meter once again. During Ragnarök you’re awarded one free game round where the meter of destruction is replaced with an End of the World bonus meter. If you get enough winning combos during this free game round, you’ll charge the bonus meter and at the end get a total win multiplier. The multipliers work as follows:

The paytable of Viking Runecraft, based on a $1.00 bet, is as follows:

When compared to other Play’n GO games like Super Flip and Fire Joker, this is actually a very generous paytable. Clearly, Viking Runecraft was meant for substantial payouts and pro gamers who want more out of their gameplay than just an hour of fun.

The return to player of this slot is 96.7%, which is a fair amount. The volatility of the game and extensive number of special features more than make up for the rest of the percentage. Overall, Viking Runecraft is definitely worth having at go at. Even if it’s just to satisfy your curiosity.

Play’n GO have really gone the extra mile with this slot. Viking Runecraft is not only innovative, it’s also a lucrative investment. Norse mythology was interesting enough as is, let alone when you add high risk factors to it. A very well earned 5 star rating from us!

Give feedback on this article Cancel reply